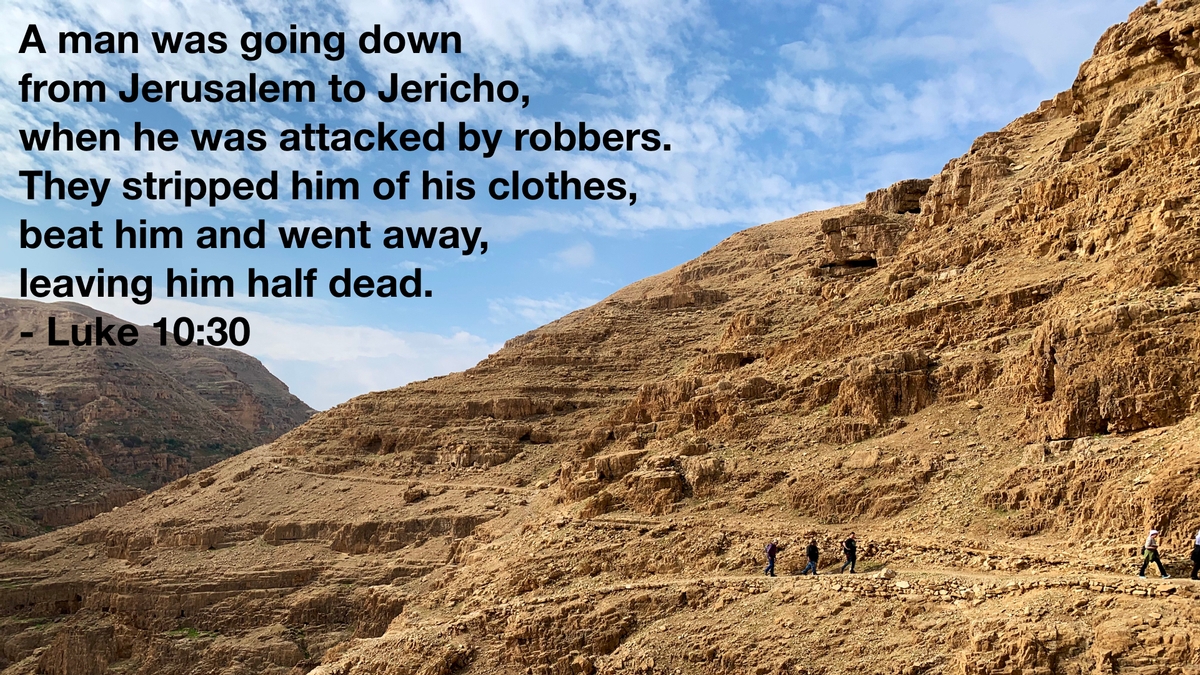 On my recent trip to Israel and Palestine, one of those most transcendent and grounded moments was a short hike we undertook along the Abraham trail. This is a trail developed by Palestinian leaders and others in the region that, like the Appalachian trail, connects together a long route that can take you from present day Turkey to Egypt, tracing the path that Abraham might have taken in the Book of Genesis when God said, “Get up and go to a land that I will show you.” This leg was what travelers for thousands of years would have walked going between Jericho and Jerusalem.

For some of us, we know of this path because of Jesus’ famous - if not most famous - parable called the Good Samaritan. Responding to a question about who is my neighbor, Jesus told them about a man who left Jerusalem and started on his way to Jericho when bandits ambushed him, assaulted him, and left him for dead. A priest and Levite both walk by - religious men who knew God’s law - and leave the man for dead. But it is a Samaritan, an ethnic and religious group at odds with Jews in Jesus day, who stops, cares for the man, and takes him to an inn. Jesus asked, “Who was the neighbor to the injured man in the story?”

As I took steps with my classmates along the route, enjoying a warm and bright day, I imagined how this story might have been heard to Jesus’ disciples - who knew this route well - had likely walked it in their lives several times, even with Jesus.

Our guide told us that the story wasn’t meant to imply that this route was unsafe - in fact, it was a path of high traffic with many merchants, people, and soldiers using it on a daily basis in Jesus’ time. The Romans had built and maintained it with , which you can see in our image, and develop an aqueduct system on the opposite side that carried water down to one of King Herod’s palaces outside of Jericho. The scandal of the story was not that this route was dangerous, although as I walked it I noticed how easy it would be for someone up to no good to hide among the rocks or watch from the top of the hill for someone to pick out an easy target. No, the scandal of the story was that a man was left for dead, and the first two people who passed by didn’t stop to help.

And the one who did stop was a supposed enemy.

I want you to hold this image as the backdrop to think about Jesus’ words from the Gospel of Matthew this morning.

Jesus, continuing in this Sermon on the Mount, tells his followers and the gathered crowds on the Mount of Beatitudes, “You are the salt of the earth.”

Salt is one of the most important ingredients to a good meal. When I cook a steak or veggies on the grill at home, salt and pepper is often a good place to start. It accentuates and brings out the flavors already there. Salt does something chemically too - it preserves the moisture in your food, so even as it is grilled into deliciousness, your meal stays moist.

What would it even be good for? You’d toss it out with the trash, right?

Jesus calls his followers and the community of God to be salt, to bring flavor to their communities and to this world, to keep the good stuff in.

Then, Jesus continues- “You are the light of the world. A city built on a hill cannot be hidden.”

As I spent time in Israel and Palestine, this mountainous landscape seemed just one vast series of valleys and hills. Even on the short hike we did, I became intensely aware of why hills are so often looked to for hope. Psalm 121 says:

“I look to the hills for help.
Where does my help come from?
It comes from the Lord.”

If you were a traveler and maybe in a part of the country you didn’t know, maybe lost, maybe running out of water, maybe getting deeper into the night, your hope would be to cross the next hill and see in the distance a light - the lanterns and fires of a city atop a hill, a destination, a place of sanctuary and safety.

But the “not so subtle” message of Jesus is the ludicrous idea that one could hide an entire city on a hill. It’s impossible. By its very nature, a city on a hilltop is vulnerable. It is visible to all.

Jesus asks the crowd to shine their lights in the same way - to glorify God through their actions, their love, their compassion for all to see.

For Jesus, this is the fulfillment of the law. He tells his curious crowds - he did not come to abolish God’s tradition; he came to fulfill it. Fulfill is the key word - to fill it with fullness. The Torah, the acts of divine power, the movement of God through history - Jesus’ ministry was the embodiment, a continuation of all that God has done and is doing and will do. His life - his passion for justice, his compassion for the wounded travelers, and his pronouncement of God’s favor - would reflect and amplify God’s law, not get rid of it.

Disciples then are not called to be less religious and less spiritual - we are called to be even more deeply connected to the fulfilling source of God’s love. More faithful than the Pharisees and scribes - who were intense and passionate and ready to argue about their faith.

Today, we begin hosting a week of Warm Nights. We will provide meals, a safe place to sleep, showers, and support for over 30 neighbors who have probably experienced a good amount of getting beaten up by life and passed on by. I’m so proud of our church for our participation - along with other faith communities - in this powerful mission - and for our continued investment in the Day Center, Safe Haven, and Bridge of Hope. But I want to tell the truth - too many people don’t know about this, too many people in our county and in our communities, too many of our neighbors don’t see our lights shining with this work to care for wounded neighbors.

I’ve had at least four conversations this week where I got to tell other people about my faith journey and what my church is doing to make a difference.

Some of them have said, “Hmmm… I wish I had grown up in a church like that.”

What would happen to our neighborhoods and our communities if we all went out this week and let our light shine - telling others what God was doing, what we were doing, how our faith in Jesus leads us to care for our neighbors? What if we invited them to join in?

Jesus’ invitation to be salt and light isn’t to be salt and light over and against others - it’s not a competition. It’s not trying to be saltier than the church down the street nor is it shining in such a way that we blind those around us. But it is being visible - it is living in such a way that those around us will miss us deeply when we are gone… That our neighbors will know we stand for something. That we know the way to sanctuary, and we will walk with them and even stop to care for them when life leaves them shattered.

So, I ask two things of you this week:

- Tell someone - a co-worker, a neighbor, a family member, a stranger - about Warm Nights, about what we are doing as a church, about what God is doing in your life. Find out what they are doing, and if they aren’t doing anything, invite them to help with us.
- Stop for someone you find on the road this week. They don’t have to be broke down on the actual road to need help. But God will put someone in your path. Stop. Notice them. Be a neighbor. Be a light.

Right now, our country is a mess. Impeachment hearings ended. We are in the full swing of another bruising election campaign. There is uncertainty. There is normalization of awful behavior. There is deep, deep division. There is so much anger. I don’t have a solution, except this:

Hannah Jones, editor of the recent 1619 Project from the New York Times, reflected in an interview on the Stephen Colbert show this week that when the Founders penned the Declaration of Independence, they began with this phrase - “All men are created equal.” Unfortunately, those beautiful and challenging words were not fully embodied in that time with the enslavement of African people, at the very least. And yet, Hannah says, so many black leaders read those words, that all men are created equal, and believed it was true and began the long and continued struggle to push our country into the fulfillment of those words. They dared ask more of this country - asked whether our salt was really salt and our light was really light. We Christians are being asked to work toward the same fulfillment of those words... today.

I know you. I know me. Even on our worst days, I believe we are. So, let’s share it.

Back to Blog Index